The Pros and Cons of C-Section for Your Second Baby

Women who delivered their first baby by cesarean section may be wondering what their options are for delivering their second child. For a long time, women who had a Cesarean delivery were advised that a C-section for all future pregnancies is their only option. For women who are hesitant to go through surgery or want to try a vaginal delivery because they want to avoid anything from more cesarean scars to complications from surgery, it’s important to consider the pros and cons of another C-section delivery.

Doctors have long advised repeat C-sections versus vaginal birth after Cesarean (VBAC) because they fear rupture of the uterus during labor1. This complication happens when the Cesarean scar on the uterus breaks open and doctors have to perform an emergency C-section. They may also have to remove the uterus to save the mother’s life.

The type of Cesarean scar can also affect the ability of a woman to choose a VBAC. These are the scars that result from a C-section2:

While a uterine rupture is a risk, it is rare, occurring in less than 1% of women who go through a trial of labour, or a planned attempt to give birth vaginally. This is why more and more mothers elect to do VBAC.

Benefits of a Repeat C-Section

Recent studies support that a repeat C-section is still safer for both mother and baby, however.

The Australian Research Centre for Health of Women and Babies in Adelaide, Australia, found that 2.4% of babies born by a planned vaginal birth after a previous C-section birth died or had serious complications, while only 0.9% died or had serious complications among babies born by a planned repeat C-section. Only 0.8% of mothers who elected for a second C-section had severe bleeding compared with 2.3% of those who pursued VBAC3.

The National Institutes of Health (NIH) also conducted its own study about uterine ruptures in VBAC3. The scientists found that there was indeed a low risk of uterine rupture in a second C-section.

The NIH study also revealed that 98% of the mothers who chose a repeat C-section succeeded in that delivery but only 43% of women who planned VBAC were able to deliver successfully. The study further noted that no baby died in the group who chose a planned C-section, but that two babies were stillborn among the 1,225 planned VBAC deliveries.

The risks for mother and baby are small but still significant. For this reason, a trial of labour is now considered to be safe for the mother to attempt, but a repeat C-section may present lower risks for both her and her child. 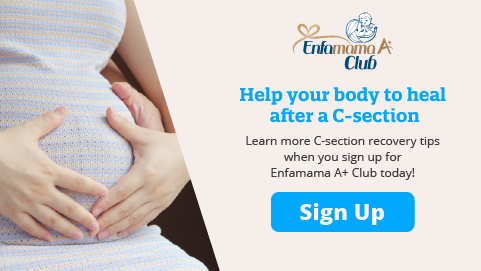 Risks of a Repeat C-Section

Giving birth is not risk-free, whether it is through vaginal or cesarean delivery. Doctors agree that the safest delivery method is still an uncomplicated vaginal birth and that is why they always recommend it for first-time mothers. However, there is no guarantee a delivery will be uncomplicated, which is why C-sections happen.

A C-section is surgery, which means it comes with risks. A repeat C-section carries an increased set of complications too.

These are the risks that come with repeat C-sections:

How you deliver your next baby after a previous C-section is not a simple decision. Talk to your obstetrician about the risks and benefits of a repeat C-section so you can make the best informed choice for you and your baby.

Looking for more information about the procedure for your second child? Who better to speak to than other mothers who have been through it twice! Get in touch with them and other experts at the Enfamama A+ Club today.